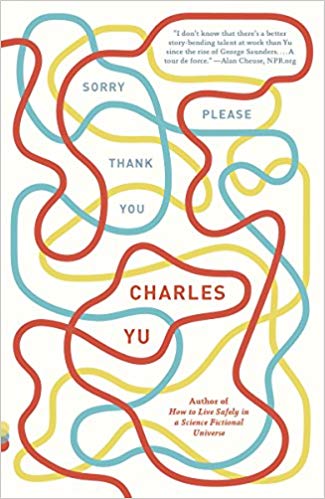 The author of the widely praised debut novel How to Live Safely in a Science Fictional Universe returns with a hilarious, heartbreaking, and utterly original collection of short stories.

A big-box store employee is confronted by a zombie during the graveyard shift, a problem that pales in comparison to his inability to ask a coworker out on a date . . . A fighter leads his band of virtual warriors, thieves, and wizards across a deadly computer-generated landscape, but does he have what it takes to be a hero? . . . A company outsources grief for profit, its slogan: “Don’t feel like having a bad day? Let someone else have it for you.”

Drawing from both pop culture and science, Charles Yu is a brilliant observer of contemporary society, and in Sorry Please Thank You he fills his stories with equal parts laugh-out-loud humor and piercing insight into the human condition. He has already garnered comparisons to such masters as Kurt Vonnegut and Douglas Adams, and in this new collection we have resounding proof that he has arrived (via a wormhole in space-time) as a major new voice in American fiction.

“Lovely and heartfelt… A brilliantly manic ride…Yu has an undeniable gift for describing, in clean, economical prose, the mechanics of things that don’t exist or are impossible.”
—The Wall Street Journal

“What Charles Yu does very well—it is a long list, but this may be its most notable entry—is to create strange and disturbingly normal alternate realities. In his first novel, How To Live Safely In a Science Fictional Universe, Yu conceived of Minor Universe 31, a universe filled with people widely, albeit unhappily, using time machines. He took sci-fi theories and ran them through a sort of literary normalizer, applying ample wit, pop-culture references, psychological insight, metaphorical flair, and a vital sweetness (his young, isolated protagonist, in search of his father, even has a stray dog for a pet). Overflowing with quasi-scientific jargon, the novel was exciting and funny and, at times, downright spooky, much like the quantum theories that Yu invoked. But most of all, for a story about a time travel mechanic, it was unfailingly realistic. . . . In his new collection of stories, Sorry Please Thank You, Yu no longer constrains himself to the pre-requisites of realism—or, to be more accurate, the appearance of realism. Freed from this yoke, he takes off in every narrative direction with the glee of a school-kid released for summer vacation. . . . While Yu has drawn many comparisons to Kurt Vonnegut for his entertaining and adept satire, and to Douglas Adams for his intelligent and inventive silliness, Donald Barthelme seems an overlooked literary forebear. . . . As readers, we are all the better for Yu’s astonishing mix of wild imagination and meticulous restraint. Of the three polite phrases that comprise his title—Sorry Please Thank You—only the last is of true relevance here. No sorries, Charles. Just thanks.”
—Los Angeles Review of Books